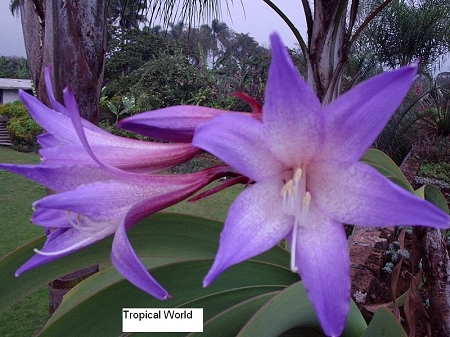 Worsleya procera aka rayneri the so called Blue Amaryllis from the of is also known as Hippeastrum procerum.  The plant reminds one of Aloe plicatilis but with drooping leaves.  Flowers are actually lavender blue similar to the “blue” color described for some orchids.

We were lucky enough to see these in habitat back in the 1970’s.  At that time there were only two known locations.  We only visited one site.  It was on a mountain side growing on what we presumed to be a solid sheet of granite on at least a 45 degree angle.  In small depressions where humus and detritus from above could collect, you found them along with various grasses and lithophytic shrubbery.  There were no trees. Much of the area was just bare rock with nothing growing.  They were growing in full sun.  The elevation was around 3200 feet.  We only saw one plant up close and that was after considerable effort to reach the extremely steep and slippery spot.  You could see numerous plants at a distance but these were virtually impossible to visit up close.  We did not see the area that pictures have apparently come from and have appeared on the Internet. This appears to be much less steep, and in much bigger masses.

Shortly after that trip, we were able to import 13 plants and to keep them here in until we purchased our property in .  They bloomed the first year or two in but definitely did not thrive.  In where we get the cool nights and mountain breezes they have prospered.  They bloom every year sporadically usually from April thru August.  We have never been able to get seed to set so all our plants are from the 13 originals by division.  We are in a seasonally dry rainforest area with heavy summer rains.  Temperatures rarely go to 90F. and are in the 50 to 60’s during night time.  We grow them on a roof top with only 4 inches of soil which we harvested from under coffee trees.  Most plant additives are not readily available. We occasionally get a particularly species of grasshopper (similar to our Lubbers in ) to attack them .  We have no other issues there but find them more challenging when moved to .

We bring plants in from only on a pre ordered basis.  We can supply up to blooming size plants to ship from .  Proceeds go entirely to support artificial propagation conservation efforts in . We do not have enough plants at this time to supply any quantity.  Please email us to be placed on a list.  We only take a $25.00 deposit for delivery within a year prior to 30 days of shipment.   Check out www.Rarespecies.org for more information on our Mexico Property.  All proceeds from this plant go toward botanical conservation efforts, and allows us to search the world for new plants.

Karen Watters
Greetings! I wanted to know if you have Worsleya "Blue Amaryllis" Hippeastrum bulb or plant available for sale? If not, could you tell me when you expect to have any and what I would need to do in order to secure one once they are available. Thanks, Karen
polina
hi! I want to buy from you wosleya a good big copy. send a photo with the price for mail [email protected] Polina
leonard smit
I am very keen to purchase a Worsleya Procera. Would you be so kind as to let me know if you have any available. I have tried to register an account on your site but it repeatedly throws out my verification word. Endless frustrations. Kind regards Leonard Smit
Bruce Pearson of Tropical World
Please email me directly for service. I do not get a notice when someone posts on the blog. We have plants ranging from $100 to $650 right now. Check out the bulb catagory under plants. Bruce
Bruce Pearson of Tropical World
It is very time consuming and expensive to ship just a couple of plants outside the United States. Mexico is less expensive but their mail system is terrible.
Diana Rose
OMGosh, I finally got a worsleya. The bulb is much lager then I expected for the price, it's wonderful. Don't tell my husband how much it was. I hope I don't over water it. Thank you, Diana
Arend Axel von Riegen
Hello, I am interested on a mature or nearly mature Worsleya procera. Would you please let me know if you have it available, your price range, time for delivery, etc. For your prompt answer, thank you in advance. Arend
louis fell ( Butch )
Hay Bruce How s Mexico ???? what s the chance of getting a " VEG, " Banana " the White one,!!!!!! Bruce drop me a Email I would like to try a veg, banana in the NORTH I live in M.D. now well hope your doing good :) butch fell & TropicalDish, " One Of A Kind ",,.
Bruce Pearson
WE should have a limited amount of variegated bananas again this spring. I will try to list them on this site so you can pre order. Yes we have shipped variegated bananas up north and people seem to do ok with them. They are a bit more "picky" than the regular banana as they do not have as much chlorophyll to support them. They are beautiful.
Quick View